The food delivery industry is one of the most impactful industries in the United States today, and has normalized itself into our daily lives over the past decade. However, food delivery wasn’t first introduced to the world in the past 10 years, in fact it’s over a century old industry and has historically been profitable.

Miles away in India, the first Dabbawalas began delivering lunch to workmen in India.

By the 1950s, television was so popular that restaurants realized they needed to offer to-go options and takeout.

Casa D’Amore in Los Angeles was the first pizza place to offer free delivery. Pizza Hut offered the first food delivery website. They were followed by Waiter.com which delivered from 60 restaurants, and still is the popular catering service today. In 1999 came Seamless.com, and the rest is history.

The dot-com bubble saw Kozmo.com, an instant grocery delivery company way before its time, Webvan, a similar company, and the aforementioned Seamless, founded in 1999, an online food ordering platform. Seamless survived as Kosmo and Webvan shuttered.

Online food delivery began as a luxury in the 90s, with online ordering platforms Waitr and Seamless, but became a lifeline in the pandemic, as the only way to shop remotely and the easiest way for restaurants to stay in business. Restaurant delivery has grown 20% the last five years alone, and accounts for up to 40% of some restaurant brands’ sales. The $24B industry is expected to grow 6x by 2025. Let’s dive into the companies that shape the food delivery landscape. 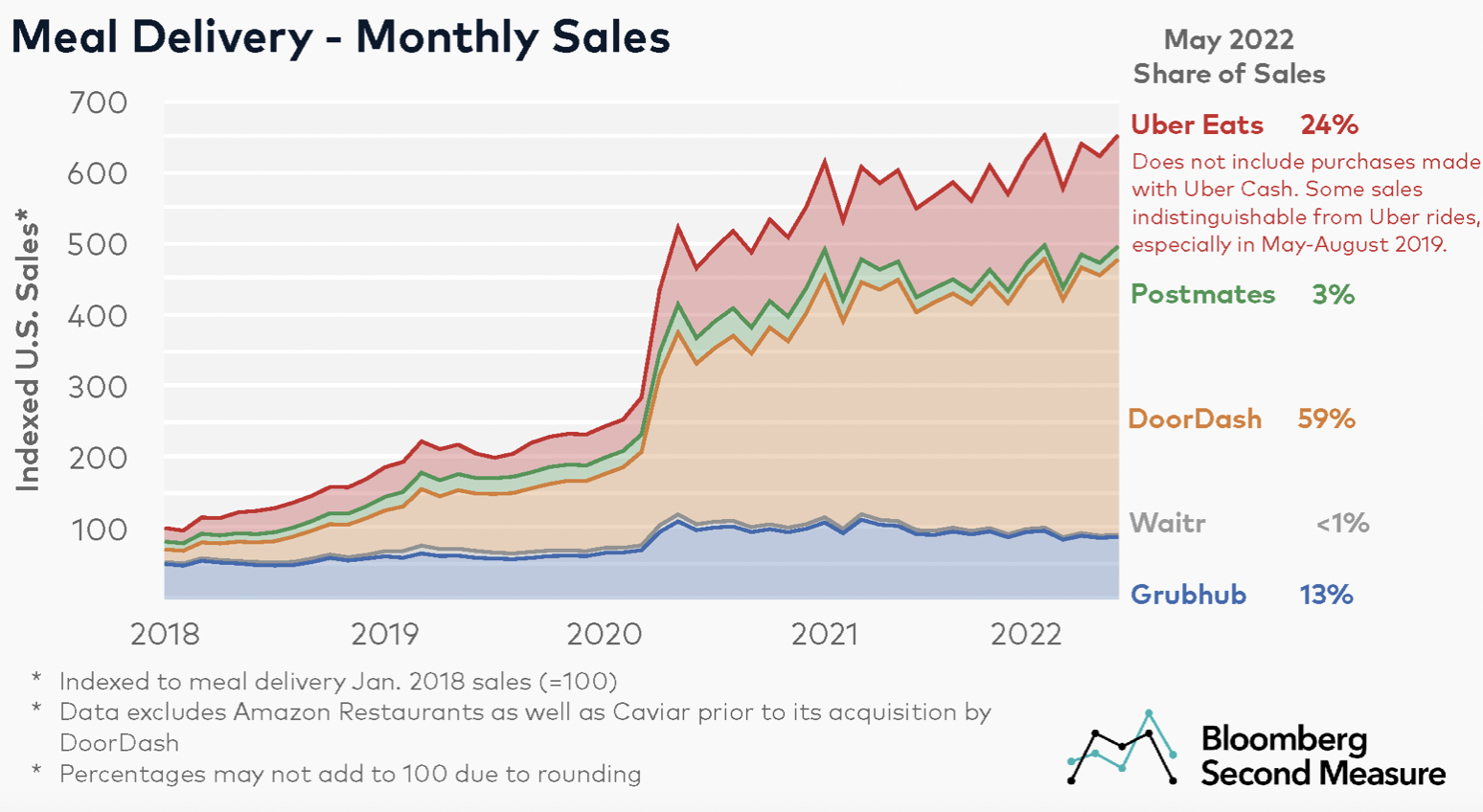 The clear winner of US market share with 59% of the market is Doordash, which had its IPO in 2020.

Doordash began as a mobile app that four Stanford students built to help restaurants and diners order food via delivery. Shortly thereafter, Doordash expanded to all 50 states, Canada, Australia and even Japan.  Doordash has an exclusive partnership with Little Caesars and the grocery chain Albertson’s, and deals with Wendy’s, Chick-fil-A, Buffalo Wild Wings, Chipotle, Cheesecake Factory and McDonald’s.

Doordash has maintained the top spot on the App Store for delivery apps.

In 2019, Doordash acquired Caviar for $410M, and in 2021 acquired Wolt for $8B, bringing Doordash into 26 countries. Wolt also aids in Doordash’s expansion into dark stores. Doordash has made acquisitions of logistics and autonomous driving softwares such as: Rickshaw, a logistics software; Scotty Labs, an autonomous driving startup; and lv15, a generative map software for autonomous vehicles. Through Doordash Labs, they’re working on offering pizza delivery robots, and have a prototype delivery robot called Marble. Doordash also owns a robotic vending machine company, Chowbotics.

In 2020, Uber Eats tried to acquire Doordash, but Doordash refused the sale, and Uber acquired Postmates instead.

Despite having more restaurants and more orders, Uber is less profitable and has less market share (24%) than Doordash. Yet, Uber Eats has grown 35% over 2021 in both number and volume of orders.

This eclectic portfolio combined with a presence in every geographic region (except East Asia) brings UberEats $8B in revenue, 152% YoY growth, and adjusted profit of $25M.

Uber has been researching autonomous vehicles as part of its rideshare service since its inception, and is pursuing food delivery robots and drones. Uber acquired Serve Robotics with Postmates to test out robot delivery in Hollywood. Uber has also partnered with Motional to use autonomous cars for food delivery.

Uber has partnered with GoPuff to offer last-mile delivery; and Bed Bath and Beyond to offer baby essentials.

Uber has also opened virtual restaurants and ghost kitchens across Europe, as discussed in our last issue. Just last week Uber announced they would offer nationwide shipping of specialty food from New York City, Miami, and Los Angeles to the lower 48 states.

While Doordash and Uber expand internationally and have substantial market share, the original food delivery company is rapidly losing it.

Grubhub was founded as an alternative to paper menus in 2004. It began to gobble up local food delivery services in various regions, including Eat24, LevelUp, Foodler, OrderUp and Tapingo. Seamless merged with Grubhub in 2013. 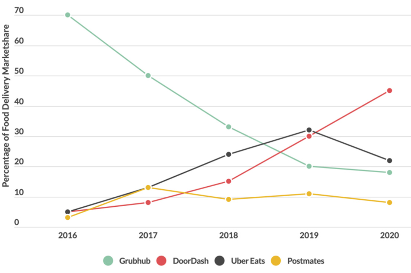 Today, Grubhub is relinquished to 14% market share in the US, but has posted 40% order growth in 2021 and $2B in revenue. Grubhub has exclusive partnerships with Masterchef, Brinker (Chili’s and Wing Stop) and Just Salad. Their deal with Shake Shack actually hurt Shake Shack’s sales given Grubhub’s declining user base. In 2020, Uber approached it for a merger, but Just Eat ultimately outbid them.

In 2021 Grubhub partnered with Russian startup Yandex to launch food delivery robots on US college campuses, as well as 7-11 and Buyk (US arm of Russian Samokat) to offer convenience delivery and dark stores. They’ve also partnered with Chrysler to offer in-vehicle ordering options.

Yet Grubhub is not profitable and cannot foresee profitability on the horizon. They have delisted from NASDAQ as part of their acquisition to save listing fees. In March 2022 Grubhub posted a $390M loss.

Grubhub is not the only former giant to be acquired.

Postmates was founded in 2011, one year before Doordash. Postmates’ founders were first time founders, and Postmates never made any acquisitions. They grew by getting merchants to subsidize user orders via sponsored advertising, and won a following in what became a saturated space. In 2018, they unveiled a delivery robot with Serve Robotics. In 2020, Uber acquired them, betting on Postmates being their key to profitability.

Uber’s acquisition has actually hurt drivers, as it requires stricter background checks than Postmates had, and many drivers have been kicked off the platform. Nonetheless, given Uber’s aforementioned adjusted profitability it would seem the bet paid off, but only time will tell.

Food delivery is not solely an American institution.

Another large player is FoodPanda, which is now owned by Germany’s Delivery Hero, discussed below. Just Eat and Delivery Hero are Europe’s largest food delivery companies, both with an international presence. Just Eat was founded in 2000 in Denmark and expanded with their acquisition of Netherlands’ Takeaway.com, Australia’s Menulog and Canada’s SkipTheDishes.  In 2020 they bought Grubhub for nearly $8B.  Just Eat owns stakes in several food delivery companies in Mexico and Brazil. Delivery Hero was founded in Germany in 2011, and expanded via partnership and acquisition into the rest of Europe, Australia, China, Korea, South America, Singapore, and the Middle East. Delivery Hero is a majority stakeholder in Spanish delivery startup Glovo, which has a presence itself in 23 countries. Both companies have partnered with British startup Starship Tech to design a food delivery robot, and Delivery Hero has even delivered food via drone.

In Asia, Grab has expanded from being the Uber of southeast Asia to a superapp for ordering everything. It posted $5.9B revenue in 2020.

In China, where Uber has failed to establish, Meituan (Tencent-backed) and Ele.me (Alibaba-backed) vie for market share.  Meituan’s total revenues increased by 56.0% year over year to $5B in 2021. Ele.me had 60% revenue growth in the same period and $1B in revenue.

Both Meituan and Ele.me have experimented with drone and robot delivery and have seen tremendous success, with Meituan flying 19,000 meals to 8,000 customers in 2021.

India has seen more success with food delivery, being the birthplace of the industry. 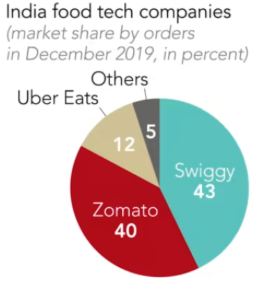 Microfulfillment centers are small-scale storage facilities located closer to consumers to reduce transit times. Often these are warehouses, but occasionally they take over parts of locations of retail stores, earning the moniker of “dark store”.

Last mile delivery in North America is expected to grow 16% per year between 2021 and 2025. GoPuff flipped the delivery model with its use of dark stores, but an Israeli company has flipped the model again. Avo is like GoPuff, but B2B for employers and landlords. Contracts with large companies thus waive the delivery fees for employees, allowing for a more affordable experience. Despite the recent mass layoff, there’s a chance this model may prove to be the enduring one.

Fabric, the company behind microfulfillment automation, raised $200M to help smaller companies compete with Amazon’s automated warehouses. It joins a cadre of such startups claiming to help merchants compete with Amazon, such as ShipBob, Byrd, and parcelLab.

Walmart has been expanding its program GoLocal, a partnership with local merchants to use Walmart’s platform for last mile delivery. Additioanlly, Walmart has begun adding automated (via Fabric) fulfillment centers to existing stores.

Amazon (along with Wal-Mart) has forayed into drones and robots for last mile delivery, and has also begun a delivery franchising option for enterprising individuals. Although their food delivery option flopped, their stake in Deliveroo allows Amazon to work on its food delivery segment after Amazon Restaurants had to shutter.

For restaurants that don’t wish to use intermediaries, Lunchbox Tech helps restaurants bring delivery services in-house and handles marketing and order processing. Recently they’ve even unveiled a beta VR restaurant that would allow diners to have a restaurant experience remotely.

Relay Delivery is a consolidation platform that allows restaurants to take orders from any platform and save on commission fees.

Many independent restaurants and an increasing number of QSR franchises are opting for in-house delivery. Domino’s has excelled at this throughout the 2000s, and even built a custom vehicle for the job. Like GoPuff, Domino’s ownership of the vertical has allowed for profitability for the company and franchisees alike. Jimmy John’s has some of the fastest delivery of any QSR, largely due to maintaining a tight order radius for drivers to stay in. JJ’s has also maintained profitability. As mentioned earlier, to compete with Domino’s delivery dominance, Little Caesar’s partnered with Doordash to offer delivery for the first time in the pizza firm’s 60 year history.

Bringing delivery in-house accelerates the consolidation trend seen overall in food delivery, which many analysts suspect is the only obvious way, automation or not, for the industry to be profitable. However, given the move towards B2B models and real estate ownership, there likely will be opportunities for profitability down these avenues as well. Perhaps moving towards a Costco style membership business like Instacart and Doordash will be what delivery companies move to. Having customers pay a subscription for the delivery fee such that the items are all they pay for, and perhaps at discounted prices. This industry has changed the way we live already, and we are only in the 3rd inning. Stay tuned and keep and eye on this space. 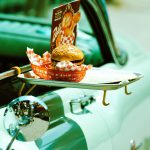 The Future of Fast Food: Drive Thrus
Next Post 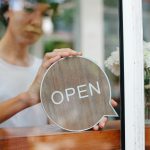